Bill Maher’s take on the year’s biggest box office hit, “Top Gun: Maverick,” isn’t quite the same as fans and critics. Instead of offering praise, he calls the mega-hit “a two-hour propaganda ad for defense contractors, militarism, chauvinism and foreign bombing.”

In Friday night’s “Real Time With Bill Maher” on HBO, the comedian-host not only touched on the film’s theme, but also on film critics “who find every film somehow lacking in references. awake” but don’t see what he sees in the Tom Cruise Movie.

“Every other movie that comes out, which is all made by liberals for liberals, with ardent liberal intent, fails. If the film talks about poverty, the director is not impoverished enough to understand it. If it’s about being gay, it’s not gay enough,” he said. “Don’t even try to put aside whitewashing, colorism, white saviourism. No amount of virtuous signals is ever virtuous enough, but somehow 96% of critics movie stars love “Top Gun” the way a Catholic priest loves summer camps.

After tipping his hat to Cruise, whom he calls “an entertaining, ageless movie star” who sometimes makes him think “there’s something to Scientology,” Maher continues to try to make his point. on the movie.

“If you’re a film critic and you’ve made it your mission to eradicate the insufficiently liberal from cinema, haven’t you noticed that ‘Top Gun’ is largely about making warmongering sexy?” He asked. “Weapons pornography, the endless silver throbs of engines, the burning of kerosene, the high d— energy. The aircraft carriers dancing in the haze of the sun, to the manly, macho masculine sounds of…Kenny Loggins?

Maher goes on to say that if the US military were a country, “its fuel consumption alone would make it the 47th largest emitter of greenhouse gases and gases in the world.” Our military is the biggest consumer of oil in the world.

“Think about it,” he said. “Next time you watch a flyover, how we will destroy the world to protect it.” 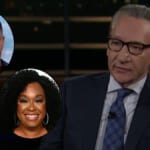 And then there’s the unnamed “enemy” that the “Top Gun” fighters fight with, who is simply referred to as the “enemy.”

“We don’t name them; we never see their faces; we do not hear them speak. Who are they? It does not matter. “We don’t know who we are bombing and we don’t care. “We are bombing someone. Impressive!”

He continued, “Who we kick ass is on a need-to-know basis. God bless America and death, to whom it may concern. Sorry, enemy. It’s not about you. It’s about us. We have Tom Cruise and you don’t. It’s an advertising measurement contest and it doesn’t matter who owns the other d—. As long as ours is longer.

You can watch Maher’s entire New Rules segment in the clip up top. 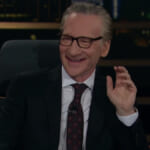