By the time the Beatles wowed America in 1964, drummer Ringo Starr had already swapped out his English-made Premier drum kit and was playing a set by American Ludwig. Premier was well in the lead as Britain’s premier manufacturer, but several other local brands provided healthy competition during that golden decade when British music took the world by storm.

However, most of these old British brands couldn’t resist the double onslaught of sexy American gear and competitively priced Asian kits, and by the mid-1970s they had all but disappeared. Do they have a historical cachet today? Well, no one would argue that they parallel the mighty lost American brands of Rogers, Slingerland and Leedy, but they are still worthy of consideration and appreciation by vintage fans.

The brands in question include names such as Beverley, Carlton and Shaftesbury, but one name in particular stands out: Ajax. This was the sharp name for drums made by Boosey & Hawkes (B&H). They never troubled the American market much, but Ajax were considered by some to be rather trendier than Premier, and many of the UK’s best in the 1950s and early 1960s played at the Ajax.

B&H is today a venerable music publishing house, repository of major works by classical giants from Bartók and Britten to Strauss and Stravinsky. But for a long time, the company was a leader in the manufacture and distribution of musical instruments. Boosey & Company was founded in the 1760s, while Hawkes & Son was a Johnny-come-lately relative, dating simply to 1865. They joined forces in 1930, when Hawkes was already making drums, after introducing his first Ajax models in 1927.

finger on the pulse

Like other pre-war British manufacturers, Ajax first adopted the innovations of American pioneers Leedy and Ludwig & Ludwig. After World War II, Ajax took the lead and forged their own identity with some super cool designs.

In 1946, the stars who championed Ajax included Jack Parnell, Ray Ellington and Eric Delaney, soon to be joined by Britain’s greatest jazz, swing and session legends such as Phil Seamen, Ronnie Verrell and Allan Ganley. In the 1950s, Ajax was the serious launching pad for many new young batsmen, including Ringo Starr, Ginger Baker and Carl Palmer.

Where the post-war Premier’s flush bracing lug was surprisingly original, Ajax’s teardrop or bullet-shaped lugs and chunky die-cast hoops were reminiscent of Gretsch, the jazz drummer’s darling. In other respects, Ajax were ahead of their time. Unlike most UK manufacturers, including Premier, Ajax were already adopting “international” shell diameters, which meant that it was possible to switch to standard American Remo heads.

Ajax’s 20-inch diameter bass drums had an extra inch of punch – 15 inches deep rather than the universal 14 inches. And they had slotted-head bass drum tension screws rather than “T” handles, which were the norm in the 60s. Ajax also tackled the growing nightmare of bass drum creep and spurs early on. weak thanks to its legendary “front bumper” anchor gear, officially the Drum Spur Carrier No.7224.

Against this backdrop, in the early 1960s, it was natural for Britain’s first pop-star drummer, Tony Meehan of The Shadows, to choose Ajax. 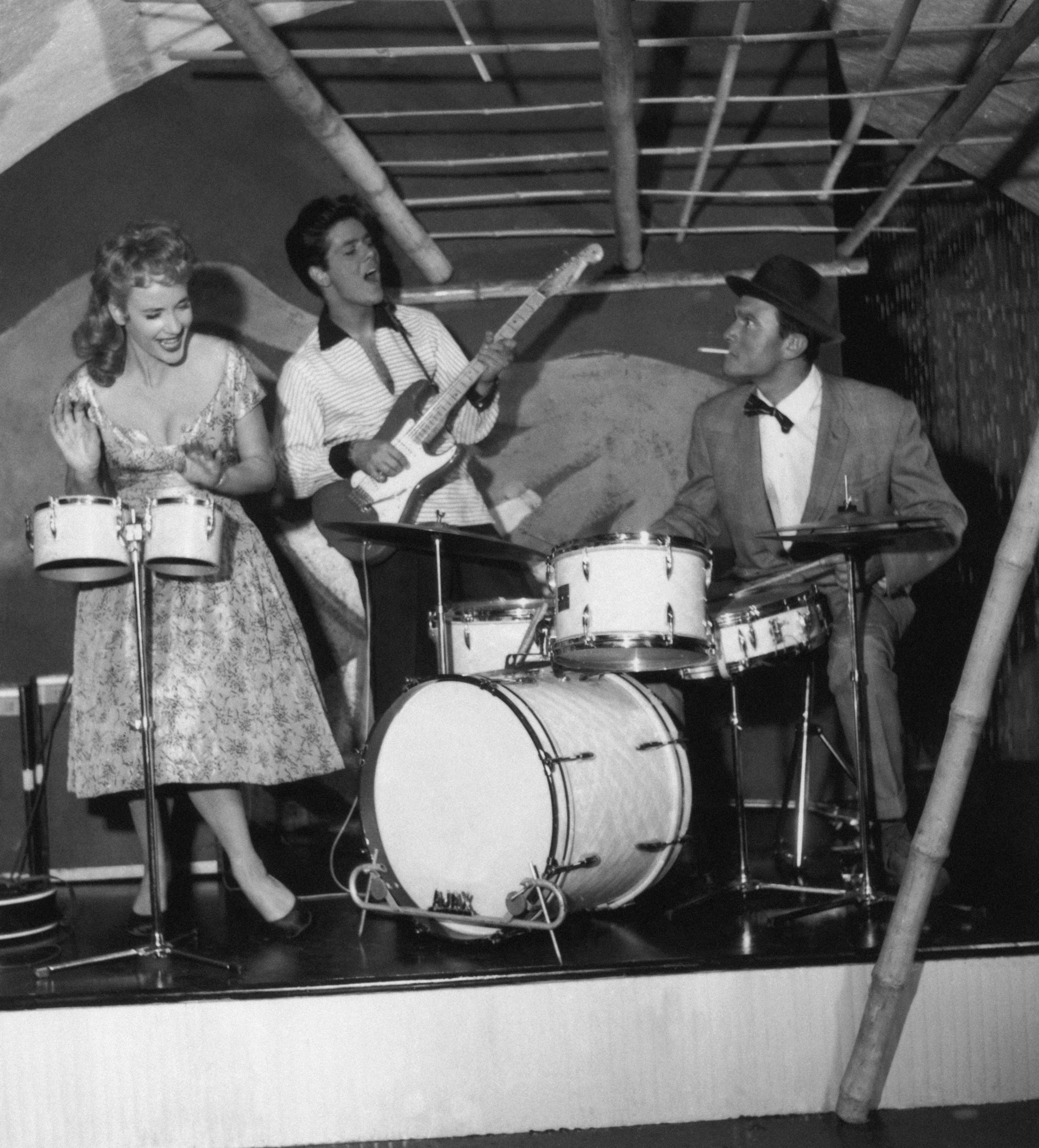 Meehan was a handsome boy with a clean image and excellent chops, and he played an Ajax kit in a delightful Navy (white) Pearl finish, prominently displayed in the band’s promotional photos and record covers. Meehan only changed when he managed to catch what was possibly the first post-war Gretsch set seen in the UK.

Ringo’s first adult kit had been an Ajax budget, thanks to his supportive father-in-law Harry Graves, who signed a promissory note in 1958 to secure monthly payments. This was an Ajax Edgware kit with single head toms and bongos, in Black Elegance finish, where “Elegance” referred to the gold threads in its pearl finish.

Boosey & Hawkes launched the Edgware brand in 1957 as a student line of Ajax drums – Edgware bass drums had 12 lugs instead of Ajax’s 16. It was named for the location of B&H’s Sonorous Works factory in Edgware, ten miles north of Marble Arch along the route of an ancient Roman road out of London.

The Ajax snare drums were particularly attractive. In the 1950s there was the 14×3 inch Snapper with a Ludwig P84 type mini colander. Deeper drums, such as the 14×5 Pipper and 14×7½ or 14×10 Symphony, had a parallel action mechanism with a long, sleek trigger lever.

Parallel action was discontinued as the 60s progressed, and the simpler P84 style strainer was fitted to the 14×4 and 14×5 drums, then called Pipperettes. The horns with pointed ends were elongated and therefore placed side by side, adding to the distinctive look of these drums. Badges changed around 1957 from a vertical oval to a square blue and red plaque, followed around 1962 by an Ajax/B&H in silver metallic plastic. 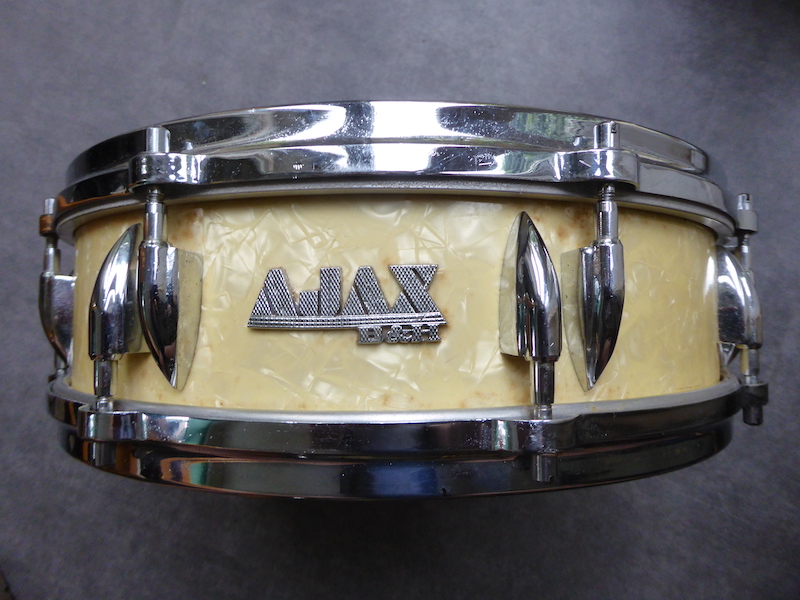 Certainly, my 14×4 Pipperette from the 60s is a thing of beauty, with a first-class hull. I honestly can’t locate the scuffed seam in the plywood bottom brace ring, such is the quality of the joinery. And the chrome plating is flawless, just as impressive as Premier’s. It’s a shame the puny strainer lets the side down, though.

Fortunes were made in the 1960s, but the competition was fierce, and one of the darkest episodes in British battery history contributed to the unfortunate sidelining of the Ajax name. From 1961, B&H manufactured Rogers drums under license. American Rogers were extremely expensive in the UK, and B&H were asked to fit Rogers fittings to Edgware cases, initially, and later to Ajax cases.

At the time, most drummers had no idea how their drums were made or what woods. B&H kept the shtum, and so few were wiser. Soon the Edgware factory was making copies of the world-leading Rogers Swiv-O-Matic tom and cymbal stands.

Since then these drums have become known as English Rogers. They are distinguished by their script-logo badges, which are horizontal with an underscore, while the American logos are angled upwards. Also, the interior of American Rogers maple shells are usually painted gray.

Hear a vintage Ajax kit from the 1940s in action.

Several top British drummers – Clem Cattini, Pete York, Ronnie Stephenson – promoted English Rogers. But the most famous by a mile was Dave Clark of the Dave Clark Five, who were massive in the mid-sixties, the first British band to emulate the success of the Beatles in America.

Clark rose to fame with an unusual five-drum English Rogers set in Sparkling Red Pearl, subsequently marketed in the United States as The Londoner. Clark’s genuine kit, fully authenticated and restored, was shown at a vintage drum show in England in 2012. Clark had offered it as a competition prize in 1966.

End of a classic

With the focus on England’s Rogers, Ajax’s final line inevitably lost ground, and it was eventually reduced to two advantageous budget lines with very limited size choices. We already know the Edgware budget range, but Stratford was the budget brand marketed by another B&H subsidiary, Besson. The two were identical except for their badges. Edgware Beatmaster and Stratford Shaftesbury were the standard four-drum sets of the 60s with 20×12 12-legged bass drums, 12×8 and 16×16 toms and a 14×5 snare.

B&H faces an increasingly difficult market. Most British drummers stayed with Premier as they coveted a Ludwig, and Rogers’ English experience waned. B&H may have had too many interests, with the drumming division occupying a rather small corner.

Nonetheless, Ajax had one more stab, coming out in style with the radically different NuSound. The line was launched in 1966 and led by the highly respected Bobby Orr and his friend Andy White, who will forever be remembered as the drummer of the Beatles’ first recording session.

A vintage Ajax NuSound kit from the late 60s, played by Franco Zuccaroli.

NuSound has put its hat firmly on American fashion for the distinctive lugs and triple-flanged hoops. Unfortunately, the pods suffered the same hairline cracks as Rogers’ previous “bread and butter” pod. The Forte outfit, with 12 and 13 inch mounted toms (a UK first), cut a dash, especially in the snazzy Burgundy Ripple finish. In fact, English Rogers and Ajax kits sometimes surface with killer finishes, especially the rare Blue Streak or Blue Ripple Sparkle.

In retrospect, NuSound could be seen as a step back from the classic Ajax style of expensive die-cast hoops and ball pods. Such are the vagaries of fashion. It didn’t matter, as NuSound barely lasted three years and Ajax ceased to exist in 1970. With harsh irony, Boosey and Hawkes went on to market Beverley drums – built by Premier.

The reputation of Ajax Drums may have peaked in the late 50s when they were a more than credible alternative to Premier. But if you look around you can still find all the drums I mentioned. They are underrated, of course, and definitely worth your attention.

About the Author: Geoff Nicholls is a London-based musician, author, journalist and lecturer. He played drums on the award-winning BBC2 TV show school of rock in 1984 and 1987 and wrote Byte the music for BBC Radio 3, which won first prize at the New York Radio Festival in 1994. His books include The Drum Book: A History of the Rock Drum Kit (2007) and The Drum Manual (2003), and he collaborates regularly with Rhythm magazine.